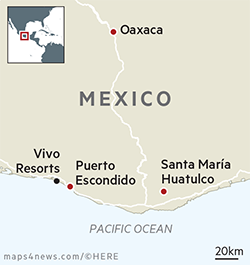 Puerto Escondido might have ended up as little more than another picturesque fishing village on the Pacific coast of Mexico, if not for a fluke of ocean geography. Ocean swells hit a sandbar off the beach, creating some of the best waves in Mexico, which attract surfers from around the world.

Today, “Puerto”, as the town is widely known, offers a laid-back surfer ambience that draws Canadian and US “snowbirds” escaping the northern winter, many of whom wouldn’t know a surf break from breakfast. But they like the atmosphere.

“When you get down here, it’s definitely a surf culture,” says condo owner Kevin Jones, a retired Florida businessman, who doesn’t surf. “There is a real bohemian vibe.”

For years, property pundits have pointed to Puerto as one of the next Mexican hotspots, but it has never really happened. The town is still hard to reach — there are few direct flights and it is a treacherous six-hour drive through mountains from Oaxaca. Many older, wealthier home buyers prefer Bahías de Huatulco, the newer, less bohemian development of resorts and condo projects about 100km east of Puerto.

Despite a steady stream of North American buyers in recent years, Puerto retains an off-the-beaten-track charm. There are no big-chain hotels, no all-inclusive resorts and no Starbucks. But there are yoga studios, organic food stores and palapa restaurants offering California-style breakfast burritos.

While Puerto gets its share of retirees, many of the homebuyers are in their thirties looking for a different lifestyle, says Eva María De Jonckheere, an agent with Century 21 Gurrión, an Oaxaca estate agency.

Finding a place to buy can be a problem. Condominium projects, the bread and butter of beach destinations, are still rare in Puerto. Much of the land is controlled by the local community, which can make development difficult.

Traditionally, “there is not enough to sell” in Puerto Escondido, says Brent May, a broker with the Huatulco-based Bayside Real Estate.

There is no official data or central listing service in the area, which makes it difficult to track pricing and sales. Agents say sales have been picking up in recent years, but this is anecdotal.

Vivo Resorts, one of the few large-scale projects in the area, has sold about 200 of 600 condos planned for a 75-acre oceanfront site a few miles from the centre of town, says Cary Mullen, a former Canadian Olympic skier who founded the project in 2010. After years of struggles, the project hit several milestones recently, such as the completion of a clubhouse, with tennis and pickleball courts (a tennis-like game played with paddles and a perforated ball). So far, 160 of the condos have been built.

Vivo is where, in 2014, Jones and his wife paid about $500,000 for a four-bedroom oceanfront condo during the pre-construction phase. Their home was completed in 2016. “We had to make a couple of leaps of faith,” he admits, but adds that he is happy with how things turned out.

Villas around Puerto are in high demand, especially oceanfront properties or estates in the surrounding hills, says Dolores Perez Islas, the Oaxaca-based chief executive of Sil Mexico, a property company. Her company is marketing a four-bedroom villa a short walk from the beach, for $549,000. An oceanfront villa with six bedrooms and more than 5,300 sq ft of living space is on sale with Sotheby’s International Realty for $1.6m.

In Puerto, most of the market is focused on land for custom homes, says Perez Islas. The problem is, says Brett Radmin, co-owner and managing director of Puerto Real Estate: “We’re starting to run out of empty oceanfront property.” Several developers are set to launch projects in the area, according to agents. A number of airlines have recently launched direct services to Puerto, and there is talk among locals of the long-delayed road from Oaxaca inching toward completion, which would cut the drive from six hours to 2 hours 30 minutes. “I have mixed feelings [about that],” Jones says. “I know it will grow and develop. At the same time, it’s such a quiet, secluded place.”